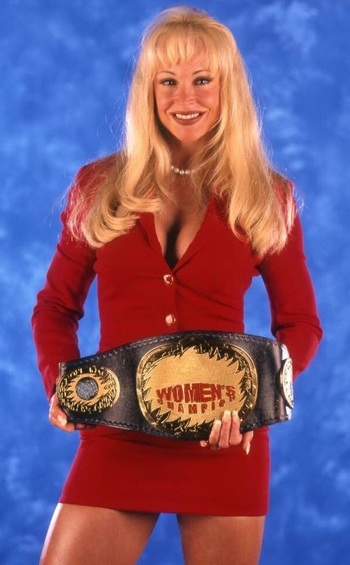 She began her career in professional wrestling in WCW in late-1995 and early-1996, making occasional unnamed appearances as an audience plant, and as part of a group of valets. In April 1996, she began appearing regularly as a valet for her husband, professional football player and WCW announcer Steve "Mongo" McMichael, as he transitioned to competing as a wrestler. Debra took on the role of a beauty-pageant queen character, giving herself the nickname "The Queen of WCW." At The Great American Bash 1996, McMichael and his partner, fellow professional football player Kevin Greene competed against two of the The Four Horsemen (Ric Flair and Arn Anderson). Flair won the match after Mongo and Debra turned on Greene by hitting him with a steel briefcase, joining the Horsemen. At Bash at the Beach 1997, Debra turned on Mongo during his WCW United States Heavyweight Championship match against Jeff Jarrett by handing Jarrett the steel briefcase, which he then used to knock Mongo out and win the match, after which she became Jarrett's manager.

After her divorce from McMichael, Debra joined the WWF in 1998, where she managed the tag team of Jarrett and Owen Hart, up until the evening of Hart's in-ring death in May 1999. She won the WWF Women's Championship from Sable in an Evening Gown match in 1999, played the role of Lieutenant Commissioner (assistant) of Commissioner Mick Foley, and later appeared on-screen with her second husband "Stone Cold" Steve Austin until 2002, when the duo left the company.