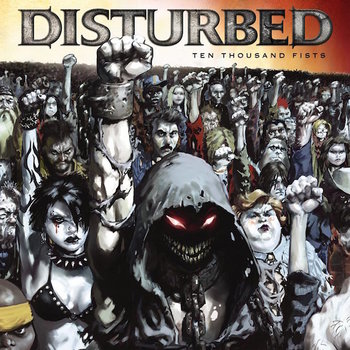 You will remember the night you were struck by the sight of / Ten thousand fists in the air!
Advertisement:

Ten Thousand Fists is the third studio album to be released by Disturbed and contains many firsts for the Chicago heavy metal group. It's the first album to feature new bassist John Moyer who replaced Steve "Fuzz" Kmak from the two previous albums. It's also the first album to feature Disturbed's grinning Mascot The Guy on the front cover, who would later become an iconic part of the band and has appeared on most of the covers of their subsequent albums.

Lyrically and musically, not much has changed from previous works, though Ten Thousand Fists is a bit more political than either The Sickness or Believe and has social commentary and references to politicians in many of its songs. It was the second album by the band to debut at number 1 on the Billboard 200 and spawned the singles "Stricken