Film / Night of the Living Dorks 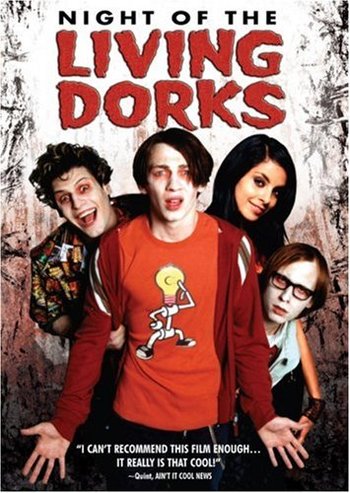 Philip Fleischhacker (Tino Mewes) and his two friends Wurst (Manuel Cortez) and Konrad (Thomas Schmeider) are not the most popular kids at their school. If anything, they're kind of at the bottom of the Popularity Food Chain.

That all changes one night, however, when Philip's neighbour and female friend Rebecca (Collien Fernandes) invites the three of them to come with her and her friends Gunther (Oliver Grober) and Frederick (Tom Lass) to a voodoo ritual they're practicing that night (sweetening the deal by offering a love potion for Philip to get local popular girl Ushi (Nadine Garmann) to like him). They try to resurrect a dead chicken with some zombie powder they got off the internet (with the intent of resurrecting Kurt Cobain next so he can be their musician), but when they pour it out of the bag, the wind blows it all over Philip, Wurst, and Konrad instead. Disappointed, the three decide to go home. On the way, however, they get into a car accident and die.

Much to their surprise, Philip, Wurst, and Konrad wake up in a morgue and realize they're zombies. Once they gather their thoughts, the three realize being undead has certain advantages (Wurst can drink as much as he wants without dying of alcohol poisoning, and Konrad learns he can take serious damage with no consequences, and has immense strength) and decide to use it to finally get some cred at school. Unfortunately, what they forget is that being undead also has certain drawbacks.

Night Of The Living Dorks contains examples of: