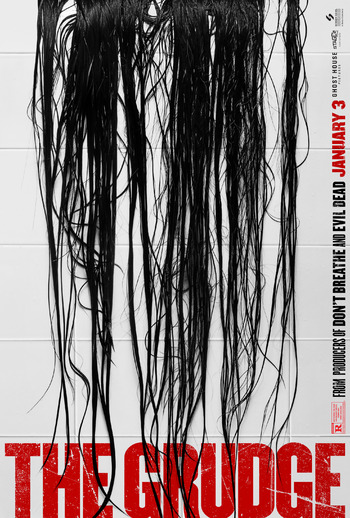 The Grudge is a 2020 supernatural horror film written & directed by Nicolas Pesce (The Eyes of My Mother). It is the fourth entry in the American Grudge series (itself based on the Japanese Ju-on franchise), serving as a sidequel set during the events of the first two films. Sam Raimi, who produced the first two films, returns in the same role here.

Detective Muldoon (Andrea Riseborough) is contacted by Peter Spencer (John Cho) about an encounter while visiting a house for sale. As Muldoon proceeds with her investigation, she begins to discover a series of gruesome deaths connected to the house…and in doing so draws the attention of the malevolent entity that resides within. With time running out, Muldoon must uncover the mystery if she is to hope of saving herself and her son. Demián Bichir (The Bridge, Alien: Covenant, The Nun), Betty Gilpin (GLOW), Jacki Weaver (Animal Kingdom), William Sadler (Die Hard 2, Demon Knight, The Mist), and Lin Shaye (Alone in the Dark (1982), Insidious, Ouija) also star in supporting roles.

The trailer for the film can be found here

The Grudge contains examples of: