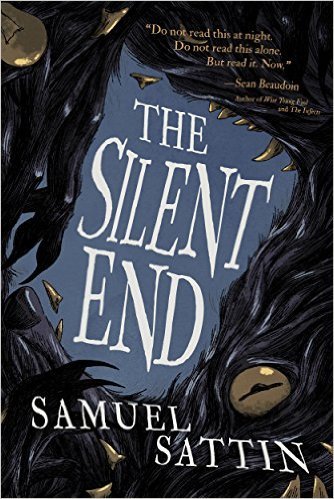 Step into a nightmare which you can't wake up from.

The Silent End is a horror novel by Samuel Sattin and published by Ragnarok Publications.

In a mist-covered town in the Pacific Northwest three teenagers find themselves pitted against an unearthly menace that dwells beneath the foundations of their high school...

Eberstark is an outcast and he's tired of pretending everything is fine. His mother disappeared almost a year ago after a long battle with depression. His father is conducting experiments and running around town in the middle of night with a mysterious man known only as The Hat, ranting to Eberstark about beasts no one else can see.

Then on Halloween night, Eberstark, alongside his only friends Lexi and Gus, discovers something in the woods to challenge his father's apparent insanity: a wounded monster. Rather than stir the town into a frenzy, the three friends hide the creature and are pulled into a web of conspiracy, dream-logic, and death. Faced down by living trucks, mirror-dwelling psychopaths, and hellish entities who lurk behind friendly faces, Eberstark, Lexi, and Gus find themselves battling to save not just themselves, but the soul of their quiet little town.