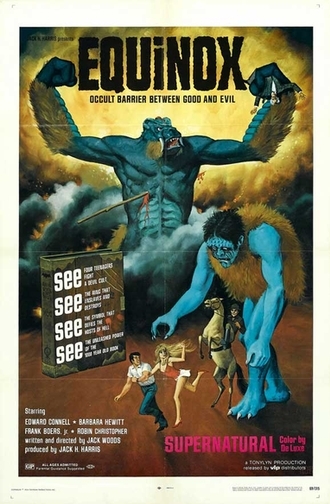 Equinox: A Journey into the Supernatural is a low-budget Cult Classic B-Movie from 1968, which is featured in The Criterion Collection. It is largely notable because its director, Dennis Muren, later went on to do special effects for Star Wars and was a founding member of Industrial Light & Magic.

Recut in 1970 by Jack Harris (the man who also produced The Blob) and retitled simply Equinox, it enjoyed a long run on late night TV and in the midnight/drive-in circuit. More footage was shot by a different director, who saw fit to put himself in the movie as the new main antagonist, Asmodeus.

Told in flashback as a reporter follows up on an interview with a man in a psychiatric ward he did a year prior. A young man named David is called by his geology professor to visit him to discuss something important at the professor's mountain cabin. He diverts a double date with his friends up to the mountain to meet the professor, only to find the professor's house crushed and no sign of him. Trying to find the professor they chance upon a crazy old man in a cave who forces an ancient book on them, but soon they find themselves pursued by giant creatures sent to recover the book for themselves.

Tropes present in Equinox include...