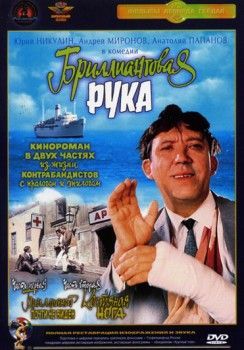 The Diamond Arm (Бриллиантовая рука, Brilliantovaya ruka) is a 1968 Soviet comedy film by Leonid Gaidai, starring several famous Soviet actors. Like many movies of the time, several of the characters end up performing impromptu songs. Both the film and the songs have attained cult status in the former Soviet republics.

The Everyman named Semyon Gorbunkov goes on a cruise to Istanbul. On the way, he meets a younger gentleman named Gennadiy. Unbeknownst to Semyon, Gennadiy is actually working for The Mafiya, being sent by the Chief (the only name given to the mob boss) to Turkey to smuggle jewelry into the USSR. The Turkish contacts don't know what the courier looks like, only the secret phrase he is supposed to use (they don't even speak Russian). Semyon ends up accidentally speaking the phrase and receives an orthopedic cast full of jewelry on his arm. After returning home, Semyon immediately goes to the cops (or, more precisely, cops find him after he attacks an undercover police agent, thinking he was a criminal), and they decide to use him as bait for the smugglers. Hilarity Ensues as the two inept henchmen (Gennadiy and Lyolik) hatch various schemes to retrieve the contraband without killing Semyon or attracting unwanted attention.

Unfortunately, the "undercover" operation ends up taking a toll on Semyon's personal life. After catching him with a woman who appears to be his mistress (she is actually working for the Chief as well), his wife leaves with their children. Trying to get to her, Semyon ends up being taken by Lyolik (who is disguised as a cop) to an abandoned car wash to retrieve the jewelry no matter what. Semyon gets away from them and happens upon a man who is driving through the woods, for some reason. Both get captured and tied to a tree. Gennadiy and Lyolik cut open the cast and take it. Semyon realizes that the man he has just met is the Chief and explains that the cops have had the contraband all this time. The criminals stuff Semyon into the trunk and drive off, intending to kill him later. However, a police helicopter finds them and picks up the car. Not realizing it, Semyon manages to open the trunk and falls out. The criminals are caught, and Semyon is reunited with his family, who now know the truth. Unfortunately, Semyon's leg is now broken for real.