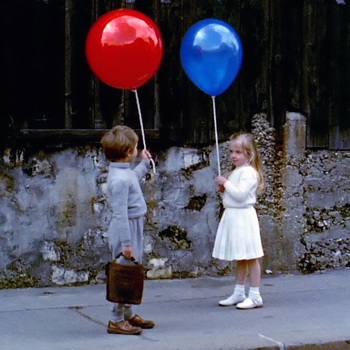 The Red Balloon (French: Le Ballon rouge) is a 1956 34-minute short film about a boy and his balloon. It was directed by Albert Lamorisse.

One day, a young boy named Pascal finds a red balloon. The balloon is actually alive and has a sentient mind of its own. Thus, they set off an adventure in Paris.

While a simplistic film made for children and to preserve the Ménilmontant section of Paris in film, critics noted the beautiful cinematography, woodwind score, and idealist allegories in a post-World War II Paris. It is noted as an art film.

The film became a sensation in the United States especially with the children. Schools often show the film in cafeterias and the film, for a while, became the largest selling non-running theatrical print.

The film won an Oscar for Best Original Screenplay. It is the only short film to win any of the five major Oscars (Picture, Director, Actor, Actress, Screenplay). It also won the Palme d'Or for short films at Cannes.

It is also available on The Criterion Collection.

Compare White Mane, another A Boy and His X featurette by Albert Lamorisse that is light on dialogue.