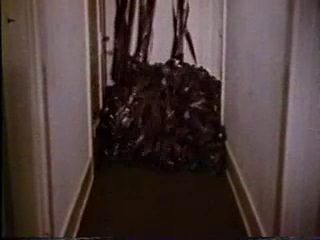 Recorded Live is a 1975 short film directed by SS Wilson of Tremors fame.

Mr. Aaines (John Goodwin) gets a letter for an interview at KLRM, a TV studio. He shows up for his interview but finds the building deserted. All he finds are some discarded clothing at a desk and a pair of film reels. The reel film promptly comes to life and goes after Mr. Aaines. Our hero is quick to learn that the film has an appetite for human flesh.

At present, the film is available for viewing on YouTube

and is also included as a bonus feature on the DVD of Tremors 4. To anyone who watched HBO during the 1970s and 1980s, Recorded Live frequently ran as filler between movies and, if YouTube and IMDB comments are any indication, served as Nightmare Fuel.