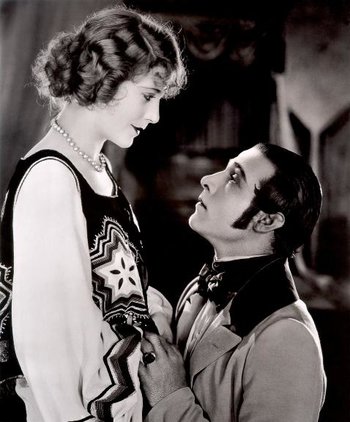 The Eagle is a 1925 silent film directed by Clarence Brown and starring Rudolph Valentino.

It is set in 18th century Tsarist Russia, during the reign of Catherine the Great. Valentino is Lieutenant Vladimir Dubrovsky, a Cossack cavalry officer who is at Catherine's palace along with his regiment for inspection. Gunfire from target practice on the palace grounds spooks the horses pulling a coach on the road outside the gate. Vladimir hops on Catherine's horse and saves the people inside the coach, one of whom is a lovely young woman (Vilma Banky).

The Tsarina is impressed by this feat of derring-do and invites Vladimir to her private chambers. When Vladimir realizes that the notoriously lusty queen wants sex with him, he flees in horror. An insulted Catherine then signs a death warrant for Vladimir. If that isn't bad enough, back home, a schemer named Kyrilla bribed a judge and cheated Vladimir's father out of the family home and lands. Vladimir declares himself an outlaw, the "Black Eagle", and finds in his old house both evil Kyrilla and his beautiful daughter Mascha—the woman from the runaway carriage.