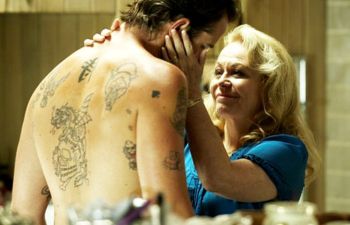 Criminals come undone.
"Things survive because they're strong, and everything reaches an understanding. But not everything survives because it's strong. Some creatures are weak, but they survive because they're being protected by the strong for one reason or another. You may think that, because of the circles you move in or whatever, that you're one of the strong creatures, but you're not, you're one of the weak ones. That's nothing against you, you're just... you're just weak because you're young. But you've survived because you've been protected by the strong."
—Leckie, talking to Joshua
Advertisement:

Animal Kingdom is an Australian movie from 2010 set in modern-era Melbourne, detailing the life of the Cody family, a bunch of reasonably successful crooks. Following the death of his mother from a heroin overdose, Joshua Cody is taken under his grandmothers' wings and is introduced to a life of crime by his uncles. However, a corrupt police squad who tackle armed robberies are out for blood and start gunning for members of the Cody family, which serves to accelerate their self-destruction.

With Guy Pearce as the only recognisable actor for most western audiences, the film has garnered a great deal of critical acclaim for its script, acting and cinematography (and won the Sundance Grand Jury prize for drama) despite a meagre budget of only $5 million AUD. Notable for its gritty, oppressive atmosphere and distinctly Australian characters and black sense of humour.

In June 2016, TNT premiered a TV series version set in Southern California and starring Ellen Barkin as Janine. Given its high ratings despite mixed reviews from the press, it was given a second season order in July 2016. David Michod, the movie director, serves as the series executive producer for the US TV adaptation.

Now has a Characters sheet.