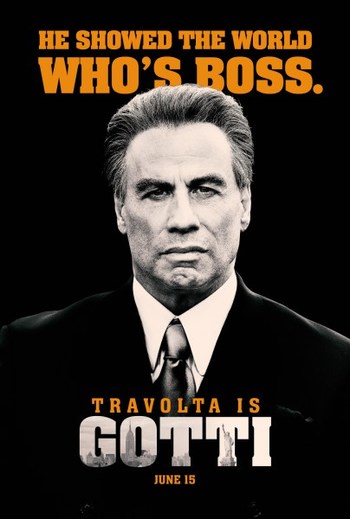 "Lemme tell you somethin': New York is the greatest fuckin' city in the world. My city. I was a kid in these streets, I started in a fuckin' gutter and I made my way to the top. This life ends in one of two ways. Dead, or in jail. I did both."
Advertisement:

Gotti is a 2018 biographical crime movie telling the story of prominent organized crime figure John Gotti, known as the "Dapper Don" and "Teflon Don", and detailing his bloody rise to power as head of the Gambino Crime Family. As shown in the film, he became famous for his flamboyant lifestyle and for repeatedly escaping prosecution until 1992, when he was finally convicted and given a lengthy sentence. Additionally, the movie depicts John Gotti Jr. initially following his father's footsteps but later breaking away from the criminal life.

It's not to be confused with the 1996 HBO movie of the same title, which starred Armand Assante as Gotti and focused on the partnership between Gotti and Sammy "The Bull" Gravano.

Tropes related to Gotti include:

"Listen to me, and listen to me good: you're never going to see another guy like me if you live to be five thousand."