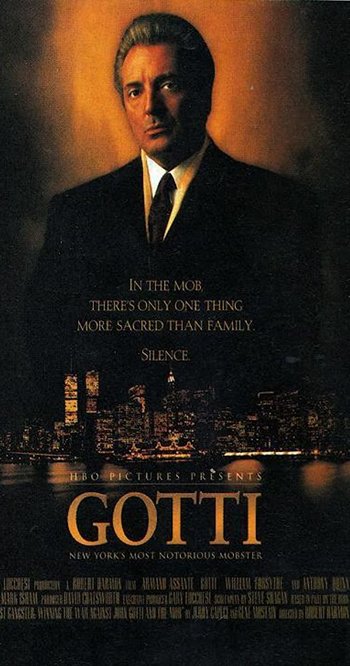 The rise and fall of a Mafia Don.
Advertisement:

Gotti (also known as Gotti: The Rise and Fall of a Real Life Mafia Don) is a 1996 HBO docudrama about the life and criminal career of former Gambino Family mob boss John Gotti, who was arrested and sentenced to life in prison in 1992 for numerous criminal charges, including conspiracy to commit murder, obstruction of justice, extortion and other offences.

In 1973, John Gotti (Armand Assante) is an up-and-coming captain within the Gambino Crime Family, a mob organization based out of New York City. After a hit personally sanctioned by Don Carlo Gambino results in Gotti having to execute a made man in order to ensure his silence, Gotti runs afoul of Paul Castellano (Richard C. Sarafian), a caporegime in the family. Gambino names Castellano his heir to the family just before dying, over longtime underboss Neil Dellacroce (Anthony Quinn), and causing resentment from Gotti and his crew.

Tensions continue to rise before coming to a head in 1985, when Gotti and Gambino enforcer Sammy "The Bull" Gravano (William Forsythe) stage a daring coup after Dellacroce passes away, assassinating Castellano outside a busy New York steakhouse and installing a new regime — with Gotti at the head of the table. Over the next seven years, Gotti rules the Gambino family with an iron fist, culminating in his arrest after a team of F.B.I. agents successfully bug a private meeting space and catch incriminating evidence. In the ensuing trial, one of Gotti's closest allies makes the decision to turn state's witness...

Originally planned to be a feature film, the project was later converted into a telemovie for HBO after the initial funding was reduced. Despite that challenge, the film went on to become the highest-rated telemovie in HBO's history, and many of its supporting cast members would later appear in The Sopranos, the famed HBO drama that would air three years later, in 1999.

Not to be confused with the 2018 film of the same name.