Film / Night of the Creeps 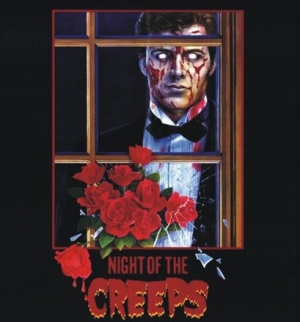 Night of the Creeps is a 1986 horror film written and directed by Fred Dekker. Night of the Creeps stars Tom Atkins, Jason Lively and Jill Whitlow. The film is notable as both an earnest attempt at a scary horror film as well as a comedic spoof of the genre. While the main plot of the film is related to zombies, the film also mixes in takes on slashers and Alien Invasion films.

In 1959, an alien experiment crashes to earth and infects a fraternity member. They freeze the body, but in the modern day, two geeks pledging a fraternity accidentally thaw the corpse, which proceeds to infect the campus with parasites that transform their hosts into killer zombies.

The classic B-movie Plan 9 from Outer Space is first referenced and then later watched by a character in the film. According to The Other Wiki, this is an intentional reference to the fact that the plot of this film is itself similar to Plan 9. The film finally saw release on DVD and Bluray in October 2009 after years of fan demand.