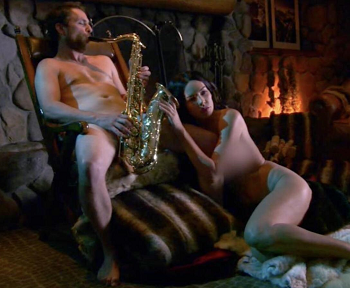 O listen to him and his saxophone
Our musical genital unicorn
He's very well hung with his golden horn
— Leonard Cohen, "Song of Destruction"
Advertisement:

A short riff on the saxophone used to indicate the arrival or presence of a sexy person. The riff can be as subtle as how loudly the music is played.

The muted trumpet can be used to similar effect.

The history of this trope comes from the fact that jazz and R&B were played in brothels and burlesque houses. The musicians were supposed to play music to, ahem, enhance the experience. Many jazz musicians' nicknames were often euphemisms, like Jelly Roll Morton, which reflected their roots as brothel musicians.

May overlap with Creepy Jazz Music when Evil Is Sexy.

Not to Be Confused with the device in Brave New Worldnote although that could be an example of it; it's never described in enough detail as to whether it's just a relabelled saxophone or an entirely different electronic or futuristic instrument, nor a character having sex with a saxophone, nor Sexy Sax Man, nor a sex hotline.

The saxophone theme appears in the song I'd Be Surprisingly Good For You.

The saxophone theme appears in the song I'd Be Surprisingly Good For You.