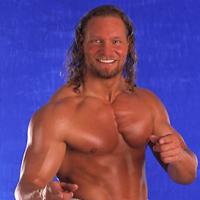 Hello, ladies!
"You know something, the Big Valbowski is a lot like TV Tropes: Click on me once, and you'll be clicking all night long."
—A TV Tropes-related example of one of the many Double Entendre riddled lines used as part of his ring entrance
Advertisement:

He got his start in London UK based All-Star Wrestling in 1994 as the jobber Scott Border, before getting his first real push in the Puerto Rican World Wrestling Council as Glamour Boy Sean, winning the World Tag Team Title belts alongside Glamour Boy Shane. He'd also work in the Mexican World Wrestling Council(CMLL) as Love Machine #2, tag team partner of Love Machine Art Barr, before breaking out as singles star Steele. He entered the WWF in 1998 with the persona of a wrestling porn star, particularly the way he would shoot "films" showing him having sex with people related to other wrestlers, particularly their wives or sisters. He later became a part of the Power Stable Right to Censor. After Right to Censor ended, he would bounce around a series of more jobber roles before being released from his WWE contract in 2009.

Ever since then, he's mostly wrestled in the Indies, along with a short, three month tenure in TNA. However, he nowadays spends most of his time as an advocate for marijuana legalisation.