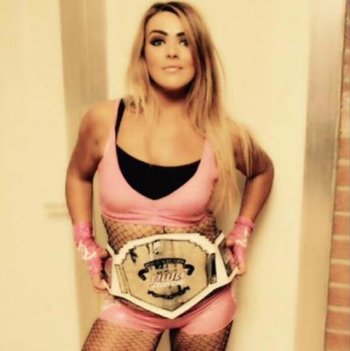 She began her career in The New '10s, training exclusively with Mainstage Wrestling (as the lone female student there). She soon became a popular wrestler in the country, and was featured across all promotions. She competed under the Kazza name for a few years - appearing regularly for Celtic Championship Wrestling - but things soon changed.

When Ireland set up a promotion titled Over The Top Wrestling - for an exclusively over 18's crowd - Kazza was repackaged as Martina, the Session Mothnote Irish slang for a Hard-Drinking Party Girl. Initially appearing as the valet to The Lads With The Flats, her popularity led to her becoming a Breakout Character for the promotion. When they introduced a Women's Championship in 2016, she eventually won it by defeating Katey Harvey. In 2017 she also became the promotion's inaugural Gender Neutral Champion