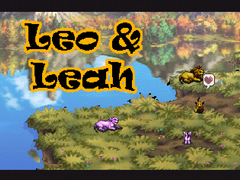 Leo & Leah: A Love Story is a freeware RPG made by Strangeluv in RPG Maker 2003, and released in 2011. It tells the tale of the eponymous couple, two lion cubs. One day, however, while venturing out into the wilderness, Leah is captured by a psychopathic hunteress who intends to sell her to the highest bidder — or worse. Leo takes it upon himself to rescue his Love Interest, though the journey takes longer than expected and soon grows in proportion beyond his wildest dreams.

The story starts off very lighthearted, hardly taking anything serious at all, with humour reminiscent of EarthBound and Super Mario RPG. Eventually, however, a deeper narrative emerges that deconstructs the genre — Leo must confront his doubts and ask himself how far he is really willing to go for Leah's sake.

for a bizarre and thought-provoking tale.

An article by Strangeluv on a very important section of the game detailing his thoughts and inspirations for making it can be found here.