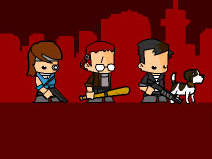 An unnamed city has devolved into chaos with the people seeming to act as brain-dead slaves! As well as other creatures being released into the fray — all with the same goal in mind, attacking unsuspecting citizens. You play as Jim Greer and his party of fellow unaffected civilians, hoping to destroy the twelve transmitters scattered throughout the city to free the populace of their mind-control and return the city back to a state of relative peace. Lead your party across a fairly large randomly generated city, and traverse across twelve zones (plus a final zone) the way you wish to. You can play violently by slaughtering everything that comes in your way, stealthily and pacifically by avoiding everything, or anywhere in between. With 96 upgrades to buy, 36 weapons to arm yourself with, several badges to earn, and a variety of characters to have in your party, can you save the city from a strange and shady villain?

. There's also a page in the Kongregate Wiki that covers the whole game

Legends of Kong provides examples of: