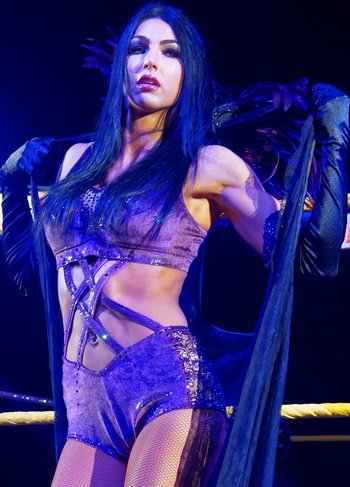 Jessica "Jessie" McKay (born 23 June 1989) is an Australian professional wrestler, who was formerly signed to WWE and competes under the name Billie Kay.

She was trained in Australia, with the Sydney promotion PWWA and made her debut in 2007 - competing under her real name. Success came pretty quickly, as she won the PWWA Title within a year and she soon became a regular at SHIMMER and the various American promotions.

She initially competed in a tag team known as The Pink Ladies with Madison Eagles, but both women broke out on their own and enjoyed successful singles careers. Jessie adopted her now-familiar sweetheart gimmick, nicknaming herself 'Everyone's Favourite Girlfriend', and continued to compete in America and Australia.

In 2015, she was signed to WWE, alongside long-time friend KC Cassidy. The two of them would compete as the tag team The IIconics under the names Billie Kay and Peyton Royce, respectively. They're 1x WWE Women's Tag Team Champions. She was unceremoniously released along with her best friend Peyton Royce and others on 15 April 2021.

After being released from the company, she reunites with her best friend Cassie Lee to make their Impact Wrestling debut at Bound for Glory as The IInspiration.