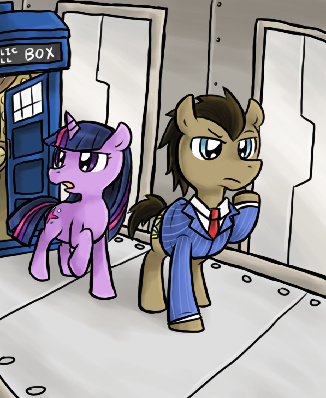 How do you hold a sonic screwdriver with hooves, anyway?
Advertisement:

The Doctor falls into Equestria. Hilarity, among other things, ensues.

Another entry into the adventures of the Doctor in Equestria, Doctor Whooves Adventures is an audio series based around the ever-popular background character from the My Little Pony: Friendship Is Magic series, Doctor Whooves. This time around he travels with the show's main characters, including Twilight Sparkle, and occasionally Pinkie Pie or Spike.

Based off the popular Fan Fiction Number 12

(written by the author of this series, Squeak Anon), it starts off with the Doctor crash landing into Twilight's library while she's out running errands. She returns to find the TARDIS embedded in her basement and the Doctor beginning his twelfth incarnation. Though as it turns out... he may not have come alone.

The series has had seven full episodes and several short adventures, all available on YouTube. (There are also a few non-canon "extra" videos with the Doctor answering fan mail and such.) The series takes a noticeably darker tone than its sister show Doctor Whooves and Assistant with a slightly more "Doctor Who-esqe" bent to the adventures. It is also notable in that it takes a page out of the classic Doctor Who radio plays, and actually airs, on Celestia Radio.

Produced by Pony In A Box Productions - see the page, or their wiki

for more information and other projects.

The Filly of the Distant Star series of shorts (starring Goodnight):

Their main blog can be found here

and their tumblr (which includes comics and other side projects) can be found here.