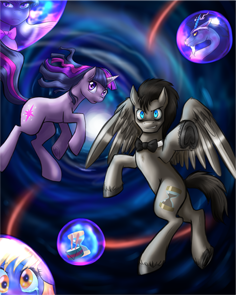 The Doctor is outnote And he needs someone more than anything. -Jack.
"You like that, don't you? Watching me throw myself on the line for your own amusements?"
—The Doctor

One of the most (in)famous Ask a Pony blogs on tumblr. Written and drawn by Jitterbug Jive

, Discorded Whooves follows the adventures of everyone's favorite Time Lord-turned-pony, the Doctor, after having been discorded, leaving him a sarcastic, womanizing, alcoholic, physically abusive asshole. At least at first.

As well as Ask Discorded Whooves

itself, the story has since grown to include many other blogs (of varying quality) told from alternate POVs that intersect with the main story, as well as several Alternate Universe blogs.

Characters from Discorded Whooves have also appeared in several crossover blogs, including:

Not listed here is a Valeyard and Octavia blog set in the main universe, which the mod has requested readers not to link to to keep it "secret".