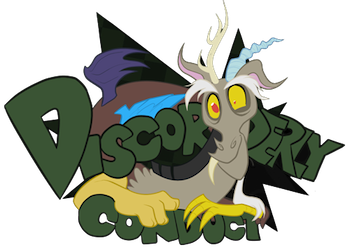 a.k.a. "A Dash of Chaos"
Advertisement:

is an Ask a Pony Tumblr starring everypony's favorite Lord of Chaos, Discord. Due to the author, Sunshine/peachiekeenie

(a bit of a Tumblr RP

The blog covers Discord and his exploits in some undefined point in the Friendship is Magic continuity (or maybe it's an Alternate Universe, who knows?). Along the way, he meets/annoys familiar characters like the Changeling Queen, Chrysalis, innocent schoolfilly Ruby Pinch, and even G1 My Little Pony villains like Tirek and frickin' Grogar. It's most notable for being one of the most consistently funny and in-character portrayals of Discord, as well as being one of the most amazingly well-drawn pony Tumblrs.

As stated before, this blog has a sister, Cupidite

, which focuses primarily on Queen Chrysalis and is drawn by a friend of Sunshine's, Tara Jenkins

). Both blogs share storylines and art styles, and they even shared the same blog space for a while.

After a long hiatus, the blog has gone through a Continuity Reboot. As such, entries prior to the reboot are now considered non-canon to the blog's story. The classic entries can be found here

. However, it appears that it's on hiatus again/cancelled, with the blogs last update being in 2014.