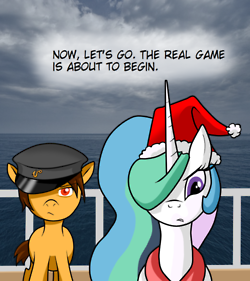 Two of the organizers, PLOTTING
A letter of obvious origin arrives in the mailboxes of many characters around the My Little Pony: Friendship Is Magic multiverse. It invites them to join a competition simply titled 'Vocational Death Cruise' and watches as the contestants arrive, each expecting a different outcome. Vocational Death Cruise is a large-scale Ask Blog competition that challenges artists from around the tumblrverse to compete for a prize by drawing comics that meet a specific criteria by a deadline.

The story thus far can be found starting here

This is a Collaborative Webcomic involving hundreds of authors. Character tropes should to the Ask a Pony page. Interaction tropes are fine. Character Tropes specific to the challenge with no basis in the actual character may also go here especially when considering Krampus as a villain is unique to the VDC and nowhere else