Will Talk for a Price 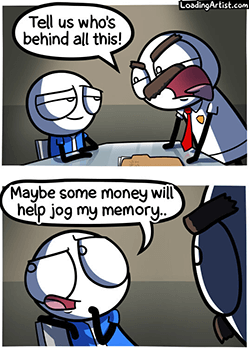 Our heroes are on a case. They're looking for a lead, and they know a confirmed witness who has the information they need. But their witness seems unable to remember what the sleuths are asking. Well, We Have Ways of Making You Talk...

Would a few dollars jog his memory?

Yes. Now he knows, and he will readily spill it. But there's still more questions, and they're starting to forget...

How about another dollar?

Of course. Now the informant will sing like a canary. The sleuths have everything they need and are happy to leave their witness alone.

Often the briber trying this tactic would imply this in the form of "would my friend Mr. Jackson ($20 bill) help you to remember?" With variations such as "Mr. Washington" ($1 bill) for a Comically Small Bribe. The bribe need not be legal tender at all; it could easily be a Trademark Favorite Food or other favor. The one with the information may subtly demand such a bribe by rubbing his fingers together.

A Sub-Trope of Every Man Has His Price.