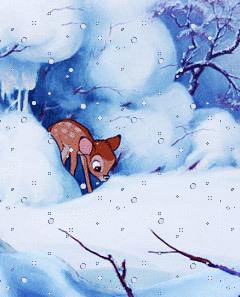 "Mother, look! What's all that white stuff?"
"For it was the first snow of the season. And as any child can tell you, there's a certain magic that comes with the very first snow."
— The Narrator, Frosty the Snowman
Advertisement:

When water evaporates it turns into water vapor, and when it condenses it becomes rain. But if the right conditions are met, with the biggest factor being the temperature, it can turn into something magical.

White petals of rain falling gently from the sky. Snow.

When a character experiences snow for the first time they may feel joy and wonder, or in some occasions, fear.

A Snowball Fight is a common way of showing they have gotten used to snow.

When it lasts all winter, see Dreaming of a White Christmas. When it's totally out of the ordinary, see Let There Be Snow. See also First Time in the Sun, which may coincide.