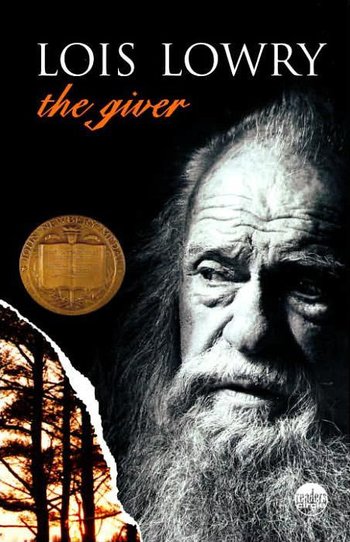 "I received all of those, when I was selected. And here in this room, all alone, I re-experience them again and again. It is how wisdom comes. And how we shape our future."
Advertisement:

Newbery Medal-winning young adult novel by Lois Lowry. Known for its expertly merciless Deconstruction of the Utopia, and incidentally provides an introduction to the Dystopia genre for grade-school readers for whom some of the bits of 1984 and Brave New World would be a tad too saucy.

The Giver takes place on Earth (presumably in the far future) in a setting known simply as the Community, which is similar to other communities not terribly distant from it. Here life is completely free from worry thanks to "Sameness", a philosophy that strives to eliminate any possible want or need from human existence. The protagonist, Jonas, is apprehensive about receiving his Assignment that will determine his future, only to learn he hasn't been Assigned at all—he's been selected to bear the memories of the past the community turned away from. Jonas is mentored by The Giver, the current Receiver of Memory, and delves deeply into the memories and experiences of the past. Eventually, he must choose whether to stay or risk it all in an attempt to get through to them.

A movie adaptation was released in August 15, 2014, starring Jeff Bridges as The Giver, Taylor Swift as Rosemary, Meryl Streep as the Chief Elder, Katie Holmes as Jonas's mother and Alexander Skarsgård as Jonas's father. Jonas himself is played by a relative unknown in the United States, Aussie soap star Brenton Thwaites.

The book has also inspired a musical

version of the book was released in February 2019.

The book spawned three pseudo-sequels, Gathering Blue, Messenger and Son. While Gathering Blue only implied it was set in the same universe, Messenger made the link much less ambiguous, and Son cemented it. Together, they form The Giver Quartet.

In addition to its exploration of the Utopia, this novel provides examples of: