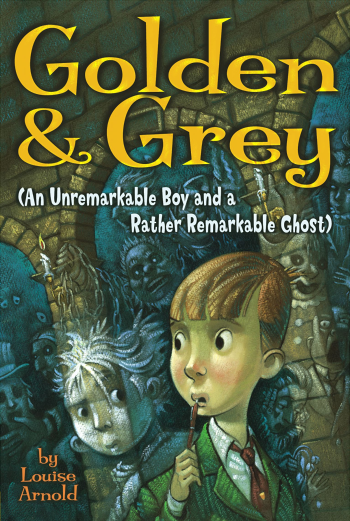 Golden and Grey is a children's fiction series written by Louise Arnold and published by Margaret K. McElderry Books.

Grey Arthur is a ghost who doesn't fit in. He's too upbeat to be a Sadness Summoner, too nice to be a Poltergeist, not human-looking enough to be a Faintly Real - and certainly not scary enough to be a Screamer.

But one day, he meets Tom Golden - a human boy who also doesn't fit in. Hearing Tom's desperate pleas for a friend, Arthur steps in and declares himself Tom's invisible friend. Sure Tom can't see him and has no idea that he exists, but other than that, Arthur is a very good friend. He pulls the notes off of Tom's back, makes sure Tom remembers his lunches, and even stops the Poltergeists from stealing Tom's socks.

Indeed, everything seems to be going quite well for the both of them - up until Tom gets hit by a car and wakes up in the hospital room, suddenly able to see ghosts.