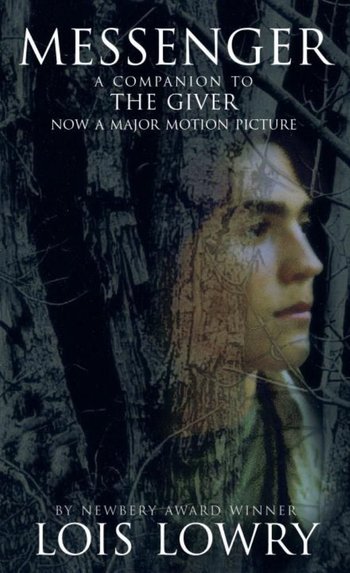 "That’s why we have the Museum, Matty, to remind us of how we came, and why: to start fresh, and begin a new place from what we had learned and carried from the old."
Advertisement:

Six years after the events of Gathering Blue, Matt (now "Matty") has been adopted by Kira's father Christopher (now called "Seer") and has moved back with him to a village — which, unlike the one seen in The Giver, is a straighter example of a Utopia. Formerly a haven for lost or broken people, its inhabitants have managed to build a genuine, loving community. Everybody gets along well and is assigned their true names (and, by extension, roles in the community) by the young, mysterious, and powerful Leader, who has the power to "see beyond." Matty hopes to be assigned "Messenger," as he's the only one who knows how to navigate the mysterious Forest that surrounds Village in order to send messages to other communities.

Something's not right, though. The people in Village are growing angry, dissatisfied, and unpleasant, which might have something to do with the frequent arrival of the Trademaster, a mysterious man who specializes in Power at a Price. Fittingly, the Forest is also growing and changing, becoming more hostile to those who enter it. When the people vote to finally close Village to outsiders, Seer bids Matty one last job — bring Seer's daughter Kira, protagonist of Gathering Blue, to Village before it's too late.