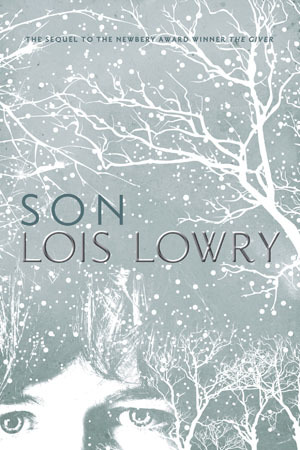 "She would die, Claire realized, before she would give up the love she felt for her son."
Advertisement:

Son is the fourth and final book in Lois Lowry's Giver Quartet, tying together and spanning the timelines of The Giver, Gathering Blue and Messenger and beyond (and as such, this article contains spoilers for those three books). It was released in 2012.

The first part of the novel, Before, follows Claire, a girl from the Community shown in The Giver who is three years ahead of Jonas. Having not been a good student, she is selected to become a Birthmother — girls who give birth thrice to sustain the Community's population and are relegated to factory work afterwards. After complications necessitate a Caesarian delivery, Claire's assignment as Birthmother is terminated and she is reassigned to the Fish Hatchery. Nevertheless, she finds ways to spend time with her baby despite the system forbidding it by volunteering to care for Number Thirty-Six (whom Giver readers know as Gabriel) at the Nursing Center. She grows to love him as well, and realizes that she's the only one who experiences such deep feelings.

And then Jonas takes Gabe with him to Elsewhere. Claire attempts to follow them on a boat, but a storm hits and she is shipwrecked.

Between, the second part, is about Claire as she adjusts to being amnesiac on an idyllic, isolated seaside community. She quickly finds a life there after she is taken in by the local midwife and healer, Alys, and befriends the local lonely shepherd Einar. But as her memories slowly return, she remembers that she has one goal — to find her son, no matter what the cost.

The third part, Beyond, picks up in Village a few years after the events of Messenger and alternates between the points of view of Jonas, now Happily Married and settled down, Gabe, now a curious young man trying to find his mother, and Claire.

Tropes present in Son include: