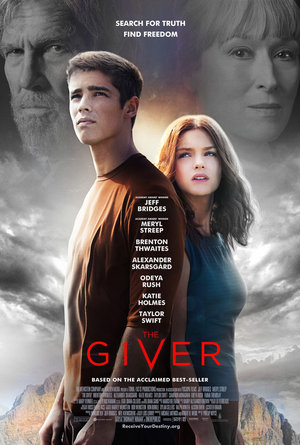 The Giver is a 2014 science fiction film directed by Phillip Noyce. It is an adaptation of Lois Lowry's bestselling young adult novel of the same name, starring Brenton Thwaites as Jonas, Meryl Streep as the Chief Elder, Jeff Bridges as The Giver, Odeya Rush as Fiona, and Katie Holmes and Alexander Skarsgård as Jonas's parents.

In the future, humanity has managed to eliminate all warfare, pain, illness, and suffering and has created a perfect society ruled by the nearly-omniscient Elders — but at the cost of removing any disruptive memories from the collective consciousness. Instead, these memories are passed on to the Receiver of Memory, whose job is to advise the Elders on any matter beyond their experience. When eighteen-year-old Jonas is chosen to become the next Receiver of Memory and unearths the secrets of Sameness under the watchful eye of his mentor, the current Receiver (called "Giver" by Jonas), the two of them conspire to change their society forever.