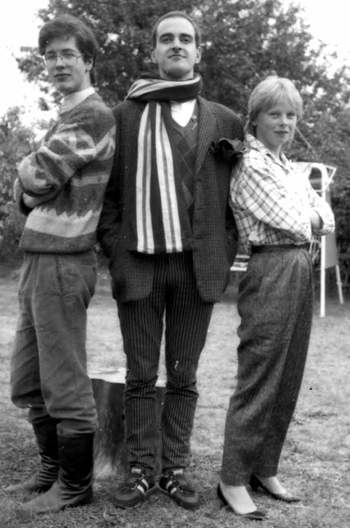 The Doctor and companions.
Advertisement:

Audio Visuals (1985-1991) was a Fan Work audio play series based upon Doctor Who. It was created by Nicholas Briggs, Gary Russell, Bill Baggs, and a couple dozen of Briggs' pseudonyms. The series is notable for being the source of much Ascended Fanon, and for kick-starting the careers of its creators in Doctor Who proper. Although the Audio Visuals productions were in violation of copyright, The BBC chose to look the other way.

Unusually for a fan production, the series barely even mentioned the events of televised Who, let alone got excessively into it. From the second story onwards, in which the Doctor regenerates, Nicholas Briggs played the Doctor for the remainder of the series, which lasted four seasons. In the planned fifth season, Briggs' Doctor would have regenerated.