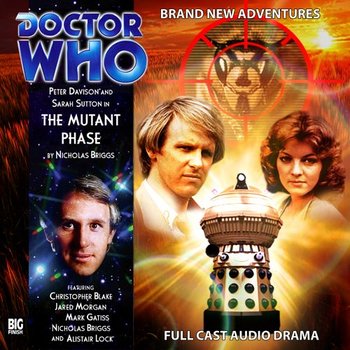 The Fifth Doctor and Nyssa accidentally end up on Earth... during the beginning of the Dalek invasion. Yes, that Dalek invasion. The 22nd century isn't doing very well, and as soon as the Doctor realises when they are, he scrambles back in the direction of the TARDIS as fast as he can. Nyssa gets stung by a wasp in the process, and her wound soon begins to get nasty.

The Daleks have other plans for him, though, and they use a time corridor to drag the Doctor over to the distant future, where only a few humans survive on Earth and the Daleks have some serious troubles of their own. A group of Daleks have started mutating into flying insectoid creatures, breaking free of their casings and destroying everything in their paths. Including Skaro. The Dalek Emperor forces the Doctor to go back in time and prevent the mutant infection from happening in the first place. A Thal scientist is reluctantly helping the Daleks, because even Daleks aren't as bad as the mutant things roaming around.

Nyssa, using her skill points in Science Hero, deduces that the Daleks use a collective gene sampling pool for their breeding stations and that wasp eggs, buried underneath a battered Dalek's skin, have caused the mutation. Several severe time paradoxes later, and with Skaro set to be destroyed in the future, the Doctor finds himself back on 22nd century Earth and facing a group of Daleks who have never even heard of him (or time travel) yet. It turns out that the Dalek Emperor avoided being destroyed along with Skaro by copying his consciousness into a Thal years ago — the best friend of the Thal scientist.

The Dalek Emperor desperately tries to explain to the 22nd century Daleks that the Doctor is their mortal enemy, that exterminating him won't help because a younger him will still defeat them all in the future, and that time travel is in fact possible. The Daleks (rather hilariously) don't believe a single word the Emperor says, but get suspicious enough to check the stung Dalek for wasp eggs, thus preventing the whole adventure from ever happening. The Thal scientist doesn't trust that solution and additionally charges forward with his antidote, and the Emperor smashes it to pieces, causing the web of time to short-circuit. When the Daleks from the mutant phase's timeline tried to capture the Doctor, they penetrated a weak point of the Vortex with their corridor, releasing a burst of temporal energy which generated a causal nexus. The centre of the paradox was the Emperor himself, who nearly created the mutant phase by going back in time to destroy it.

In the normal course of things, the 22nd-century Daleks would have detected and extracted the wasp DNA from the infected Dalek themselves; if the Emperor had convinced them to use the GK-50 pesticide instead, it would have failed to kill off the infection (since it was in an early stage and not responsive to the pesticide yet), which would thus have spread through the Dalek gene pool and created the mutant phase. Since the Emperor smashed the injection probe instead, this never happened; the mutant phase never existed, the Thals never worked for the Daleks and the Emperor never travelled back in time. Skaro was never destroyed, and the Doctor is entirely unable to explain to Nyssa what happened.

Part three of four in the Dalek Empire arc. An abridged one-hour cut of this story, originally included as a Feelie with issue 124 of Doctor Who Adventures, is legally available for free on Soundcloud