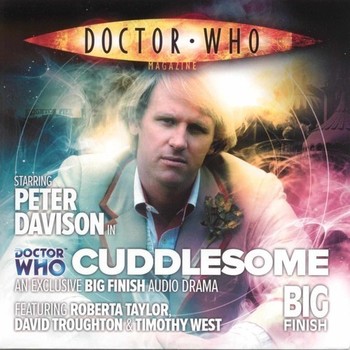 in 2012. It is a remake of the Doctor Who Audio Visuals story of the same name.

The Fifth Doctor accidentally lands his TARDIS in the garden of a snarky plumber named Angela, whose boyfriend John is enjoying the much-publicised comeback of the Cuddlesomes. They were the hottest must-have toys of the 80s: cuddly pink talking hamsters, sold as are the perfect toy for children of all ages. Giddy about the recently accounced line of new Cuddlesomes, John digs his old one out of the attic and finds that it still loves him very much. So much that it goes straight for his throat.

Angela follows the Doctor to the Cuddlesomes' main base of operations. It turns out that their inventor, a man named Turvey, was deeply traumatised and driven to madness when bullies destroyed his childhood teddybear. An alien psychic leech called the Tinghus latched onto that insanity and nestled itself inside young Turvey's mind, back in the 80's, to grow. But since the Thingus is harmed by adult hormones, it needed to get rid of all the world's grownups. So, it inspired Turvey to create the Cuddlesomes as a global virus.

Turvey loves his creations and genuinely wanted every child in the world to have one, and he would have gotten away with it too if it hadn't been for that pesky Revenue and Customs Department. During his time in prison, he was also put on meds that suppressed the Thingus voice in his head. So the Thingus patiently waited, planning a new wave of Cuddlesomes during the years Turvey was locked away. The new generation could turn every adult human on earth into a Thingus.

The Doctor is genuinely bothered when he realises that the Cuddlesomes are alive and not inherently evil. John, who has survived the attack thanks to the Doctor, also genuinely loves his own Cuddlesome and has formed a strong psychic link with it. However, Thingus' death is still the only option in the end, and the Cuddlesomes collectively die along with him. Angela's and John's relationship doesn't survive either.