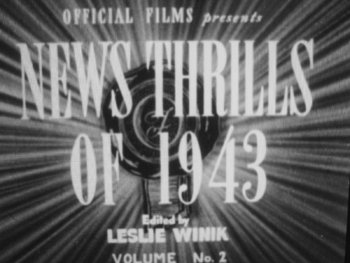 A news program shown in cinemas, typically . These were almost always in black and white. Many of them had a propaganda element to them, subtle or blatant.

A fictional example of the former:

"Soviet troops enter Warsaw. The people of Warsaw cheer the end of Nazi tyranny and the restoration of freedom."

To give a fictional example of the latter:

"Comrades, the mighty Red Army continues to crush the evil fascists. The brave men of the Rodina have now taken Warsaw and liberated Poland from their evil grip. Casualties were heavy, but the Red Army prevailed."

Pretty notorious even in their own day for being flamboyantly censored and emotionally manipulative (edging dangerously close to Documentary of Lies territory in some cases), and for often outright ignoring "troubling" topics in favor of "cute" human-interest stories.

The footage recorded for these newsreels is one of the primary audio-visual records of the first half of the 20th century, especially the Second World War; the Allies in particular would send each other footage to appear in their respective newsreels. As a result, it will often appear in documentaries and if you watch a lot of them, you will start seeing the same clips turn up a lot.

The newsreel faded away in the 1950s and 1960s due to the rise of TV network news, and often mocked up in period pieces. The last documented newsreel in the Western world, Polygoon

, was screened in The Netherlands in 1987, while Japan's Yomiuri International News ran as late as 1997.