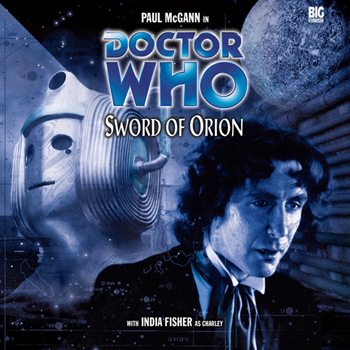 Right from the get-go, Eight got a glimpse of war.
Advertisement:

Released in 2001, Sword of Orion is the Eighth Doctor's first personal encounter with the Cybermen note Though chronologically, the much later-released "The Silver Turk" takes place before this.

Ramsay the Vortisaur is a bit under the weather, so the Eighth Doctor takes Charley to a futuristic human colony market in the Garazone system to see if they can find any information to help. The TARDIS, however, ends up on a spaceship, and the Doctor finds himself forced to travel along with a group of interstellar junk collectors.

The ship's crew have a few problems already: they hate their new by-the-book captain, their secret smuggling operations are interrupted, they're in the middle of a war between sentient androids and the humans who created them, and to top it all off, the junk ship they're taking apart for spare parts turns out to be full of Cybermen.

The new captain knows a whole lot about Cybermen, and she reveals that she's looking for a way to drag them into the humans vs. androids war as soldier slaves. The Doctor tries to explain to her just how terrible of an idea that is. In the end, she (of course) turns out to be an android spy, although the Doctor catches on a bit late. When the Doctor and Charley are ejected into space, the captain makes a Heroic Sacrifice to save Charley's life and defeat the Cybermen, because she was touched by the Doctor's trust in her. Although she can't technically die, she'll float in space unconscious forever, or until someone would revive her. In a way, the Doctor notes, she was more human than the humans who made her: simply adapting as a new life form, as opposed to humans who ignore (or, in case of the Cybermen, literally erase) their conscience.