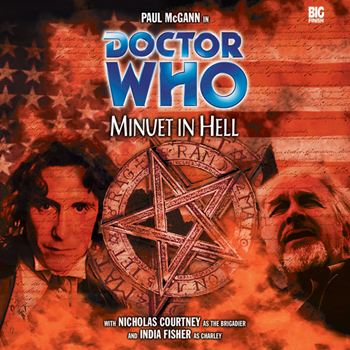 "In my name shall they cast out devils."
Advertisement:

The Eighth Doctor is mumbling, panicking, and he's lost his mind and his memory... again.

It's the 21st century, 20 Minutes into the Future, and a new state of America is about to be founded: Malebolgia. The prime candidate for its governor is Dashwood, a Southern televangelist and a descendant of Francis Dashwood, 15th Baron le Despencer

. Much like his ancestor, this Dashwood is the leader of a local Hellfire Club

. Unlike his ancestor, though, he actually summons demons, engages in active Satanism, and forces young girls to work at the club as "Pretty Little Satin Bottoms".

One of those girls is Charley, who can't remember a thing either. She befriends a girl named Becky Lee, who happens to be the granddaughter of Dashwood's main political opponent. The Doctor, meanwhile, is plucked off the streets and locked up in a mental institution where Dashwood illegally collects catatonic patients. His new machine, still in its trial phase, can extract people's minds as data so their brain matter is safe to operate on. The Doctor is lined up as one of the lab rats, and is named "Zebediah Doe" ("John Doe" was taken). His cellmate, Crane, soon weasels his way into a position of The Igor while mocking the Doctor's memory loss.

While Dashwood preaches on about the glory of his new state, Charley is almost forced to — holy shit, it's Brigadier Lethbridge-Stewart! The Brig is undercover at the Hellfire club and investigating the Dashwood institute. He's a bit miffed when that job turns out to involve Dashwood's giant demons. Becky Lee, however, has some magic tricks of her own, courtesy of her family being part of the ancient English order of St. Peter. She and Charley escape.

The Brigadier meets the Doctor (who, by coincidence, also escaped). But since the Doctor's completely mad and the Brig hasn't met Eight yet, he doesn't recognise him and neatly deposits "Zebediah Doe" back at the institute.

When the Doctor's brain is plugged into the P.S.I. machine, the thing naturally overloads, and the Doctor goes even more mental. Crane, meanwhile, fully believes he's actually the Doctor. This leads the Doctor to figure out what happened: while visiting Grace Holloway, the Doctor and Charley released Ramsay back into the time vortex, but things went a bit wrong and the TARDIS crash-landed in the USA. The Doctor's psychic link with the TARDIS got all muddled up and crosswired with Crane (Nicholas Briggs), a random bystander. The Doctor has no luck trying to convince Crane of that, however.

The Brig and Becky Lee investigate, and — eventually — figure out what's going on. By that time, however, the Doctor's mind has been spread out across a dozen mental patients, Charley is dressed up in bondage gear and forced to marry Dashwood as his satanic queen of Hell, Becky Lee's grandfather is possessed by an evil alien posing as a demon called Marchosias, and Dashwood is about to start his big statewide telethon. The plan is to extract the minds of voters, replace them with demons, and make Dashwood President of the USA. The aliens' plan is a bit less complicated: scare the pants off of everyone and feed on their fear.

The Doctor manages to get his mind back using some clever trickery, and makes "Contact!" with what's left of his own mind inside Crane's head. (This works brilliantly, since Crane is technically another version of himself.) The Doctor reminds Dashwood that the original Francis Dashwood was actually a rather nice chap, and that Satanism is, and always will be, sensationalist nonsense. The Brigadier, Obfuscating Stupidity, causes Dashwood's maniacal nazism claims to be broadcast to all his potential voters and saves the day. Crane manages to destroy the machine using the Doctor's knowledge and, with it, the alien.

One problem, though: the demons told Charley she was already dead.