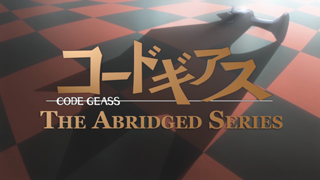 "I am Lelouch Vi Britannia... And this... is my story."
— The Opening Line of the Series
Advertisement:

Exactly What It Says on the Tin. One of several Abridged Series based on Code Geass. The original run of eight episodes (and one "half-episode") was made during a 2008-2010 run. After that, it was taken down for two years, and appears to be running back from the first episode.

. It may not have those fancy new syncronized lipflaps but it's as good as gold.

Not to be confused with the other Code Geass Abridged Series, Code MENT.