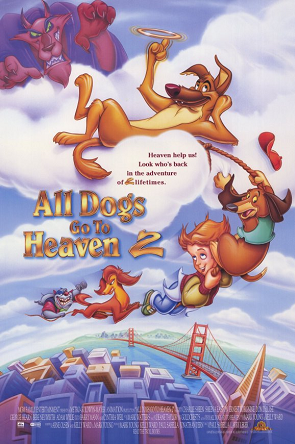 It starts off with Charlie in Heaven, where he's joined by Itchy soon after. Gabriel's Horn, which is used to open the gates to Heaven and allow the souls of deceased dogs to enter, is stolen by Carface (for the evil Red to use). Charlie volunteers to get it along with Itchy "volunteering" as well. It's up to them to save Heaven before it's too late, but that isn't to say there won't be some surprises along the way.

As was the case with all but one of the sequels to his movies, Don Bluth was not involved. It's also the only other sequel to a Bluth film (after An American Tail: Fievel Goes West) to get a theatrical release rather than be Direct to Video.

This animated film provides examples of the following tropes: