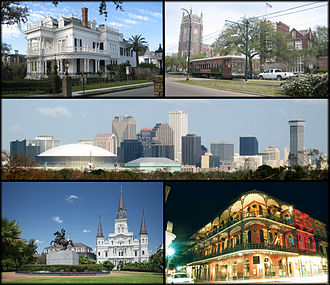 A Crescent City montage, courtesy of Wikipedia. From top left: A typical New Orleans mansion off St. Charles Avenue, a streetcar passing by Loyola University and Tulane University, the skyline of the Central Business District, Jackson Square, and a view of Royal Street in the French Quarter.
"New Orleans resembles Genoa or Marseilles, or Beirut or the Egyptian Alexandria, more than it does New York.... Like Havana and Port-au-Prince, New Orleans is within the orbit of a Hellenistic world that never touched the North Atlantic. The Mediterranean, Caribbean, and Gulf of Mexico form a homogenous, though interrupted, sea."
— A. J. Liebling, The Earl of Louisiana (quoted in A Confederacy of Dunces)
Advertisement:

Ah, the Big Easy, famous for Mardi Gras, voodoo, and Jazz. Commonly associated with Cajun culture, despite being a few hours away from any of it. Also, hurricanes—both meteorological and mixological

. The French have a consulate there. Another claim to fame is the food; you can find almost any kind of seafood (except lobster) here. The squeamish can rest easy about how well-cooked their food is.

New Orleans has a rich cultural history. Sitting out the mouth of the mighty Mississippi River where it meets the Gulf of Mexico, the city was founded by French traders in 1718 but was likely a hub of commerce and conflict long before then as a gateway for goods and people to enter the middle of North America. The French, Spanish, British, numerous indigenous groups, and (later) Americans all fought for control of the port. Enslaved African people comprised a large portion of the city's population as the city became a major hub of chattel slavery, but the French Code Noir provided slightly more opportunities for freedom than the British system, and New Orleans soon boasted the highest population of free Black people in North America. The mixing of their cultural traditions with French Catholicism, native practices, and the many other ideas and beliefs that intersected in this place led to the development of the city's unique Afro-Creole culture.

The United States obtained the city from the French with the 1803 Louisiana Purchase, opening the door for American Western expansion. (The Purchase, by the by, turned into one of the greatest deals in history by accident. Thomas Jefferson was only interested in buying New Orleans, and that was what the authorized sum of money covered. But in France, his negotiators found Napoléon Bonaparte so fed up with the Western Hemisphere, having just lost Haiti to a slave revolt, that he sold them everything France had in North America, doubling the size of the United States with the stroke of a pen.) The Purchase also came as a hell of a shock to the locals, as New Orleans was under Spanish rule at the time. They didn't know that Napoleon had reclaimed Louisiana for France by conquering Spain until he sold it out from under them. The final great battle of The War of 1812 played out in New Orleans, and while it is typically pointed out that the battle occurred after the war was officially over, American history could have turned out very differently if the British military had taken the city. After the battle, the population of New Orleans grew to be one of the largest cities in the U.S., at one point closely rivaling Baltimore for the title of the nation's second-largest city. (The two cities share some remarkable similarities to this day, including the fact that their local accents, influenced by similar immigrant groups arriving at similar times, are shockingly close.) The strategic and economic importance of the port once again came into play during The American Civil War. While Louisiana seceded and joined the Confederacy, the Union army prioritized securing New Orleans to keep the Mississippi River open, and the North held the city under military occupation through most of the war after May 1862.

After the war, however, the growth of railways and other forms of transportation made access to the Mississippi less and less important, and the city began to decline through the 20th century. Its low elevation and aging infrastructure resulted in utter disaster when Hurricane Katrina hit the city in 2005, resulting in devastating floods that displaced thousands of residents. It is now only the 50th biggest city in the U.S. (45th biggest metro), a steep descent from its former glory, and is still struggling mightily to recover. However, it remains the biggest city in Louisiana, and its rich history, culture, and the spirit of its people still shine brightly as ever. The Big Easy is also the birthplace of the first American Mafia crime family, thanks in no small part to the historically significant Italian population, many of whom arrived here after the Civil War especially in the late 19th century.

If you're visiting the city, you may notice the streets here tend to be rather narrow, because they were originally built for horse and carriage. Do not complain; this indicates that a natural disaster has never annihilated the surrounding area and created room for a wider road. Tourists think being they're cute by pronouncing the name of the city "N'awlins". To not incur the wrath of a local, just go with "Nu-OH'rlins"note For the city, at least. The parish (county) would be pronounced "Or-LEANS".. Once you've lived here a couple of years, your speech will naturally slur it down, but don't force it.

The street map of New Orleans is rightly infamous for containing a plethora of multi-cultural tongue-twisters, none of which are locally pronounced the way American English — or their original languages — might suggest. Examples include Chartres Street (pronounced "Chart", unlike the French city) and the Muses, a set of 8 parallel Uptown streets named after the Greek goddesses and all pronounced uniquely (e.g. Calliope is "Cally-op" and Melpomene is "Melp-O-Meen", infuriating Greeks and antiquarians alike). And then there is Tchoupitoulas Street, the main artery paralleling the West bank of the Mississippi. The proper pronunciation of "Tchoupitoulas" is a local Shibboleth, withheld from tourists because it's hilarious to listen to them sound it out. On your first visit to New Orleans, just accept the fact that discussing the streets with the locals is going to involve some fun at your expense.

If you ask for directions in New Orleans, don't expect to hear "North", "South", "East", or "West". Due to the Mississippi River which curves through the middle of the city,

you'll likely hear something like "Go up on Saint Charles Avenue" if you wish to leave the French Quarter and go Uptown, for example, even though to outsiders' eyes, Saint Charles Avenue "appears" to go south and wind back up to going north. Although it sounds complicated, it's really not that hard to figure out when you look at a map. Basically, New Orleans is laid out in grids like many other cities, but all directions stem from the winding Mississippi River, not compass points. Streets running parallel to the river have "up" and "down" directions based on the river's flow. Perpendicular streets (and these do converge and split, owing to the bends in the river) have "riverside" and "lakeside" directions (Lake Pontchartrain to the North of the city being the lake in question). These directions work on the East Bank. Should you find yourself on the other side of the river, what the hell are you doing? The West Bank is for locals. (Seriously, sarcasm aside, the East Bank is where New Orleans keeps 98% of the cool tourist stuff. The West Bank is for malls, big box stores, car dealerships, and all the other quotidian crap you find in every American city.) If you wish to study the geography a bit further, a good guide can be found here.

It's important to remember that "Eastbank" and "Westbank" are in reference to the location of the river. This is probably what would trip up visitors the most since there are fragments of the East Bank that are geographically west of the West Bank, and vice-versa.

New Orleans's oldest (and for a long time only) pro sports team, the Saints of the National Football League, were for many years the absolute worst team in the entire league—they went their first two decades without putting up a winning season and over thirty years without winning a playoff game. Locals obligingly rewarded this performance by nicknaming the team "the Ain'ts," and at particularly rough spots in their career, people would show up at home games wearing paper bags over their heads to avoid the shame of being known as Saints fans. After Katrina forced them to play their home games elsewhere while their home stadium, the Superdome, underwent repairs and housed thousands of displaced residents, many feared that the city would lose its team to a larger and wealthier market. Upon returning to the city in 2006, with a brand new head coach and quarterback, the Saints put up their best season in the franchise's history, nearly reached a Super Bowl, and eventually won one a few years later. The morale boost this gave to the city is hard to quantify, and the Saints don't seem likely to go anywhere anytime soon with one of the most dedicated fanbases in sports.

Now New Orleans loves its Saints, even though their new winning reputation was blotted by the revelation that some of the defensive coaches ran a "bounty" scheme that encouraged Saints players to intentionally injure opponents. The scheme ran for several years, including the Saints' Superbowl win in 2009, and killed quite a few careers when it was exposed. The Saints struggled under the penalties the NFL imposed, particularly in 2012, but rallied to return to being a top League contender with their hometown support alive and well.

The city's other pro sports team, the Pelicans (formerly Hornets) of the National Basketball Association, don't quite have the history of the Saints, having moved the city from Charlotte just a few years before Katrina. However, they too had their best season ever not long after the disaster. With both teams now sharing common ownership, they both seem stable finally.