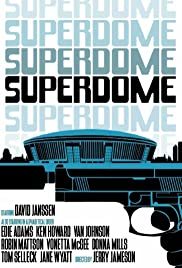 Superdome is a TV movie written by Barry Oringer and Bill Svanoe and directed by Jerry Jameson that aired on January 9, 1978 on ABC to promote Super Bowl XII.
Advertisement:

In the days leading up to the Super Bowl, player Dave Walecki (Ken Howard) has a bad knee, a drug addiction, and problems with his wife Nancy (Susan Howard). Jim McCauley (Tom Selleck) is being courted by a shady management firm. Meanwhile, a killer is targeting people connected to the favored Cougars, whom a gambling syndicate doesn't want to win. Now the Cougars' manager, Mike Shelly (David Janssen), has to find out why before the game is ruined.