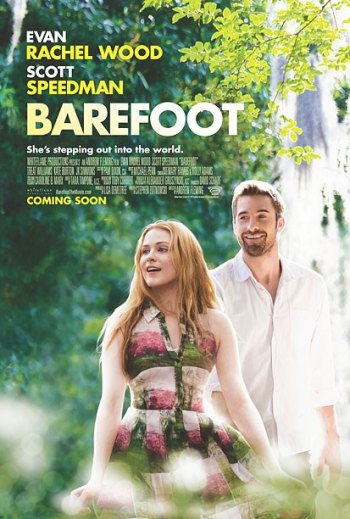 "He’s a rebellious trust-funder who specializes in strip clubs, one-night stands and gambling debts. She’s a possibly schizophrenic mental patient raised in near-captivity by an abusive mother. How could these two kids not fall in love?"
—from Sara Stewart's review

Barefoot is a 2014 Romantic Comedy about a mismatched couple who bring out the best in each other.

Jay Wheeler (Scott Speedman), the estranged, ne'er-do-well son of a wealthy New Orleans family, has fallen on hard times due to his own jerkassery. By day, he does probation by working as a janitor at a Los Angeles psychiatric hospital, where his idea of helping the patients (providing them with liquor and pornography) is frowned upon by his boss, Dr. Bertleman (J. K. Simmons). By night, he hangs out at a strip club and tries to avoid a Loan Shark to whom he owes $40,000. However, Jay's life starts to improve when a mysterious, shoeless young woman named Daisy Kensington (Evan Rachel Wood) is checked in to the hospital. A childlike waif who's lived a life of isolation, Daisy's gentle nature begins to bring out Jay's better qualities.

When Jay learns that his younger brother is getting married back home, he realizes that this is a perfect chance to reconnect with his kin — and maybe trick his father (Treat Williams) into paying off his debts. He tells his family that he's better off than he actually is, complete with a girlfriend, but can't talk any of the strippers he knows into going along with the scam. Eventually, Jay realizes that his only option is to sneak Daisy out of the hospital so she can pose as his significant other. While Daisy charms the Wheelers at first, she can't hold back her eccentricities for long, and Jay is finally forced to admit the truth. Desperate, Jay and Daisy flee back to LA; along the way, they have to deal with the police pursuing them — and their growing attraction to each other. With Jay teaching Daisy about the world (and beginning to realize that she doesn't belong in an institution), and Daisy continuing to smooth his rough edges, they fall in love — but will they be able to stay together?