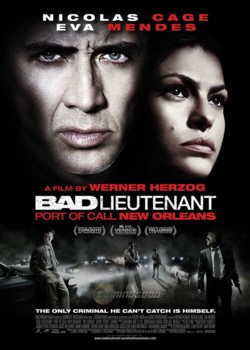 McDonagh: Shoot him again!
Midget: What for?
McDonagh: His soul's still dancing...!
(Pan over to the "soul" doing a big break dance)
Advertisement:

[The] Bad Lieutenant: Port of Call New Orleans, made in 2009 by Werner Herzog, follows Terrence McDonagh (played by Nicolas Cage), a police officer in post-Katrina New Orleans, as he investigates the deaths of five Senegalese immigrants connected to a drug ring. While tracking down drug kingpin "Big Fate", McDonagh engages in his vices of gambling, drugs and sex (sometimes at the same time), getting high off of everything from marijuana to prescription painkillers and betting heavily on football games.

The film is openly inspired by the 1992 crime drama Bad Lieutenant by Abel Ferrara (which was set in New York). Both films showcase the same basic character, but the two movies are different enough that Herzog rejected the label of "remake" being applied to his film. Ferrara's Lieutenant and McDonagh are also somewhat dissimilar, with the Lieutenant having actual feelings of regret and remorse about his actions, while McDonagh just indulges in his habits more and more, using his position to get him whatever he wants.