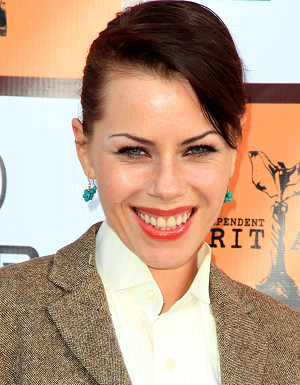 Fairuza Balk (born Fairuza Alejandra Feldthouse; May 21, 1974 in Point Reyes, California) is an American actress. The Farsi word for turquoise is "Fairuza", which is what her dad exclaimed when he first saw her eye color.
Advertisement:

She has played witches in two movies. She also appeared in Celebrity Ghost Stories once or twice, along with an episode of Tyler Henry: Hollywood Medium.

To casual filmgoers, she is best-known as Edward Norton's ex-girlfriend in American History X. This was a bit of tongue-in-cheek casting: a Roma woman playing a neo-Nazi.

Fans of The Sopranos fans may recall that when the third-season finale "Army of One" first aired, it starred Balk as FBI Agent Ciccerone, who entraps Adriana into becoming an informant. After Balk declined to join the series as a regular the following season, David Chase had all of her scenes reshot and replaced her with Lola Glaudini, who took over the role. Since this Orwellian Retcon, any imagery of Balk in the role has been scrubbed; it only exists in old issues of TV Guide and VHS copies

She is the frontwoman of Armed Love Militia, a collaborative band. Fairuza was inspired by traditional folk songs taught by her father when she was younger.