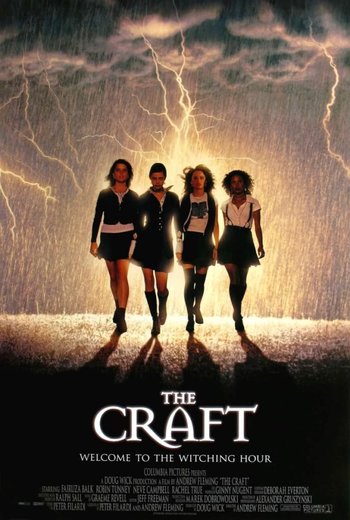 "Now is the time. This is the hour. Ours is the magic. Ours is the power."
— Nancy, Bonnie and Rochelle
Advertisement:

A 1996 teen Urban Fantasy horror film, directed by Andrew Fleming and starring Fairuza Balk, Neve Campbell, Rachel True, and Robin Tunney, about four high-school outcasts who practice witchcraft, and how the use of their powers affects their friendships and relationships.

Sarah Bailey (Tunney), a troubled teenager from San Francisco, moves to Los Angeles with her father and stepmother. Enrolling in a local Catholic school, she inadvertently attracts the attention of three of the school's outcasts: Nancy (Balk), Bonnie (Campbell), and Rochelle (True), who also happen to be witches.

Each of the three suffers from a personal problem of some kind: Nancy lives in a trailer with her mother and abusive stepfather, Rochelle suffers racist harassment by the school's Alpha Bitch, and Bonnie has severe burn scars all over her body.

The four decide to use their powers for personal gain, casting vengeful spells against those that wronged them. However, the use of power begins to go to their heads, and eventually some of them turn out no better than the people who abused them.

The film is notable for hiring an actual Wiccan as a script consultant and another one to play Nancy, but since Wicca is a pretty mundane religion in real life, most of their suggestions were ignored in the name of Artistic License.

See also The Covenant, which is essentially the same premise but with lead guys instead. Chronicle, like The Covenant, is similarly Spear Counterpart to this movie, but with a superhero spin. Constance M Burge says she was inspired to create Charmed partially off this movie; indeed, Love Spit Love's Cover Version of The Smiths' "How Soon Is Now?", which would become the theme song of Charmed, was recorded for The Craft.

A stand-alone sequel, The Craft: Legacy, was produced by Blumhouse Productions and released on October 28, 2020