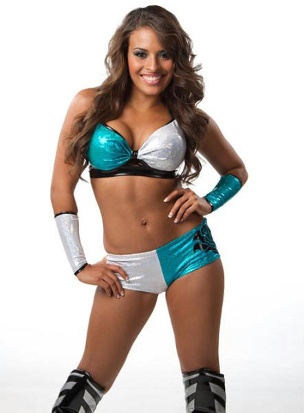 Trinidad is best known for her time in TNA as Rosita, the storyline cousin of Sarita and member of the stable Mexican America from 2011-2012 where she held the TNA Knockouts Tag Team Titles once with Sarita. Once the stable disbanded, Trinidad was Put on a Bus and soon released from TNA in 2013 and started wrestling in independent promotions as Divina Fly. She also had a few brief stints in WSU and WWE in 2013 and 2014 as one of Adam Rose's "Rosebuds", appearing again in 2016 to put over Asuka. She made a one-night return to TNA in 2015 as a wrestler, in addition to a few appearances as Austin Aries' valet during the pre-taped World Title Series. She has been with WWE since 2017 under the name "Zelina Vega", first debuting in WWE NXT before being called up to the SmackDown roster, she would later move to Raw, then return to Smackdown in the 2020 draft, only to be suddenly released on Friday the 13th of November 2020, due to a dispute over main roster wrestlers being banned from having relationships with third parties such as Twitch and YouTube. She would make a surprise return to WWE as a heel on the July 2nd 2021 edition of Smackdown.

For her acting career, she has appeared in films (short and full length), most notably The Witches of Oz and Fighting with My Family (playing fellow wrestler AJ Lee in the latter).

Not to be confused with the short-lived sitcom Thea or Slavic Mythology-themed video game Thea: The Awakening.