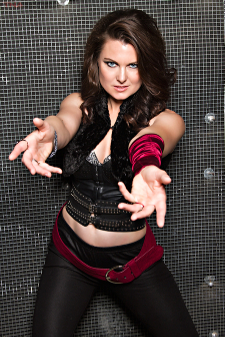 Her velvet touch preys on the weak…
Advertisement:

Katarina Leigh Waters (born 10 November 1980 in Lüneburg, Germany) is a German-raised English professional wrestler and actress best known for her work in WWE as Katie Lea (Burchill) and for TNA as Winter.

Waters made her wrestling debut in the year 2000 originally using the name Kat, but once WWF Diva Miss Kitty (Stacy Carter) became The Kat, she changed her name to Nikita after the titular character from the television series. A mainstay in the Frontier Wrestling Alliance and other British/European indies, Nikita very quickly found herself winning British Women's Championships and was even the original Queen of Chaos in France. She became known in the Americas through PGWA and became Katie Lea after signing with WWE in 2005, having stopped using the name "Nikita" after being allowed to work a return match in Germany by WWE's developmental territory Ohio Valley Wrestling, who also let her show up in SHIMMER. She quickly became one of the cornerstones of the OVW women's division, becoming a two-time OVW Women's Champion and even competing in and winning the first ever televised Women's ladder match against Beth Phoenix for the title.

In 2008 she was called up to the main roster on the WWE Raw brand in a storyline as the storyline sister of Paul Burchill, where she was given his surname as well as a Cruel Intentions-style gimmick with heavy Incest Subtext. It wasn't long, however, before Vince McMahon's Author Appeal gave way to the WWE's switch to a PG rating, causing the storyline to be retooled to a classy Rich Bitch with Hot Witch tendencies and her overprotective General Ripper-wannabe brother. As the Burchills no longer appealed to Vince, they were moved down the card and eventually brought to the WWE ECW brand, where they lasted as jobbers until both were released.

She later resurfaced in 2010-2011 when TNA introduced the character of Winter, a strange admirer of Angelina Love who reveled in smoke and mirrors and who believed that she and Angelina were lovers in past lives. This culminated in a storyline where Winter and Velvet Sky, Love's partner in The Beautiful People, fought for Love's allegiance, with Winter's magical trickery winning out in the end and bringing Love to her side. Along the way she took Sky's place in winning the TNA Knockout Tag Team Championship once with Love, then went on to feud with Mickie James (who incidentally was also Katie Lea's first and only feud on the Raw brand where she had any real focus) over the singles Knockout Championship, which they traded back and forth a couple of times before Winter and Love both slowly but surely fell down the card and quietly disbanded upon being released in summer 2012.

Currently she splits her time between wrestling on the indies under variations of her name such as "Katarina Leigh" or "Kat Waters", and taking up small-time acting roles in short films and vignettes mostly showcasing her sense of adventure, humor, and/or seductiveness.