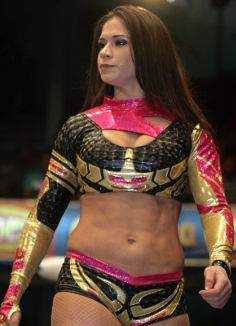 Sarah Stock (born March 4, 1979) is a Canadian kick boxer turned professional wrestler turned trainer for WWE. Trained by Phil Lafon, Dan Kroffat, Diluvio Negro #1, Eddie Watts and José Luis Feliciano, Stock began her professional wrestling career in Winnipeg, Manitoba's Top Rope Championship Wrestling promotion and moved back and forth across the country, working for various enterprises, facing both male and female wrestlers. She then moved to Monterrey Mexico to hone her craft on a different independent circuit, starting by turning one of her ring names, Dark Angel, into a gimmick in LLF and gaining the attention of AAA. Dark Angel would be offered regular work with Triple A after losing her mask but wound up jumping to their main rival CMLL, where her best known work was done. She is also known for her time in TNA, where, under the ring name Sarita, she became a two-time TNA Knockouts Tag Team Champion, holding the title once with both Taylor Wilde and Rosita. She has also worked in Japan for JDStar and its Spiritual Successor World Wonder Ring ST★RDOM, where she was the Wonder of Stardom Champion.