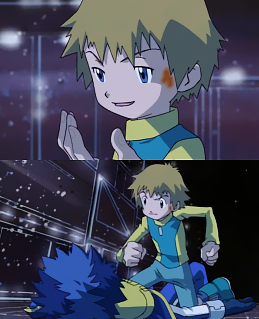 Oh, Ken! When will you learn?
"It's my BLOOOOD!"
— Gaara, Naruto
Advertisement:

Some people become a little squeamish when they see blood. Others... well, let's just say they don't take it nearly as well.

This trope applies to whenever a character becomes incredibly deranged and/or powerful at the sight of their own blood. Perhaps their agility increases, or they become more alert, or they begin to realize their opponent is a serious threat and decide to go all out. In any case, their skills suddenly increase when they realize THEY are the one who's bleeding.

The most cliched way this is depicted is for a man to take a blow to the face, causing his lower lip to bleed slightly at the corner. He wipes the blood with one finger, looks at it, and smiles, right before kicking ass.

Somewhat related to Minor Injury Overreaction. Compare Critical Status Buff, which is a similar concept in Video Games. Contrast Afraid of Blood which deals with character having a phobia about blood.

No relation to Superhuman Transfusion, an upgrade bestowed via blood.

He bleeds for the first time EVER here and freaks out as a result.

He bleeds for the first time EVER here and freaks out as a result.