Film / It Came from Hollywood 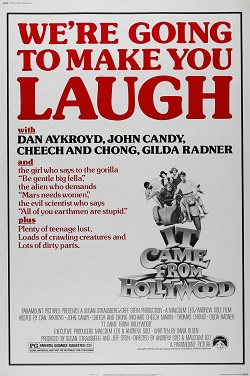 Chong: So what's this movie about, man?
Cheech: Oh, it's about all kinds of things, man - it's like a bunch of crazy movies, man, they put together...
—Opening dialogue
Advertisement:

It Came from Hollywood is a 1982 comedy film compiling clips from various B Movies. In 1982, years before the Internet and a time when home video was still just taking off, this film was basically a funny Clip Show of old B movies that were still hard to find in that day and age.

Starring Cheech and Chong, Dan Aykroyd, Gilda Radner, and John Candy in several framing segments, it fondly remembers and pokes fun at the genre in sections like Giants and Little People, Monsters, Brains, etc. Some connecting clips have a simple story like a little girl (Radner) on her bed talking about scary movies, or Cheech and Chong going to the movies and talking about the films as if they are watching them. At one point, John Candy, along with Aykroyd, hosts a short celebration of Ed Wood.

The movie is available to watch on YouTube here

The following movies had clips shown in It Came From Hollywood: